Texans worry about water when it stops raining. Major water legislation can pass the legislature following droughts. When it rains again, the fervor for change ebbs. Following the record one-year drought in 1995-96, Senate Bill 1 in 1997 created a process to organize users statewide to craft a plan for the future of Texas water. That effort resulted in a statewide water plan that requires updates every five years.

Despite the recurrent nature of this process, scattered lonely voices frequently express concern about future water shortages, often roused by localized skirmishes over real or imagined threats to specific groups of users. Citizens can become part of the planning process and help prevent future water shortages. Understanding that process is the first step.

The planning process relies on input from 16 Regional Water Planning Groups (RWPG), each gazing 50 years into the future. The Texas Water Development Board (TWDB) consolidates those local plans into a single plan for Texas. For a description of the process see “Water Planning and Groundwater Management” in the February 2016 issue of Tierra Grande and online. Input from the state level comes from the TWDB in the form of technical assistance to the RWPGs and approval of each regional plan before incorporating it into the statewide plan. This results in a plan devised by RWPGs and focused on forecast needs of local water users, including those regulated by groundwater conservation districts (GCD).

On average, RWPGs have 22 voting members plus non-voting members. Voting members control the main functions of the RWPG as they each represent one of 12 interest groups, including the public, counties, municipalities, industry, agriculture, environment, small business, electric-generating utilities, river authorities, water districts, water utilities, and groundwater management areas. Among other things, voting member duties require them to attend meetings, be informed, actively assist in developing a regional water plan, direct technical consultants, cooperate with other RWPGs, adopt a regional water plan by the deadline, and prioritize projects required by water management strategies (WMS) specified in the plan.

Non-voting members come from TWDB, Texas Department of Agriculture, Texas Parks and Wildlife, State Soil and Water Conservation Board, adjacent RWPGs, and holders of rights to large amounts of water with headquarters in a different RWPG. These members attend meetings to act on behalf of their specified entity while providing information to assist the voting membership. More information on regional water planning is at www.twdb.texas.gov/waterplanning/rwp/index.asp.

Each RWPG designates one political subdivision to administer and manage the planning process. This may be a river authority, council of government, municipality, or other political subdivision involved in the planning process. Administrators conduct business for RWPGs, including organizing meetings. They also enlist technical consultants who provide the modeling of expected supplies of groundwater and the demand projections underlying the plan. Technical consultants participate in RWPG meetings and provide data to TWDB.

The RWPGs schedule preplanning meetings. All RWPG meetings are open to the public, but these are specifically designed to elicit suggestions from the public. They must occur before technical work begins. Rules require RWPGs to establish a process enabling the public to help identify ways to ensure adequate future water supplies are available.

Following this meeting, work begins on projecting population, water demand, water availability, and existing water supplies. These inputs help form the official WMS that serves as the backbone of the water plan. After drafting the plan, each RWPG holds a public hearing to gather written comments on the initial plan. The RWPG then sends that plan to the TWDB and the public for review. The public has 60 days to comment, state or federal agencies 90 days, and the TWDB 120 days. This stage of the process includes notifying the TWDB of potential interregional conflicts between plans to allow a negotiated resolution.

Finally, an avalanche of electronic documents descends on TWDB in the form of final regional water plans. The deluge includes supporting data and documents. Each RWPG presents a prioritized listing of projects required to fulfill the envisioned WMS. At this stage, the TWDB consolidates the regional plans into the state water plan.

TWDB rules require each RWPG to include the following in its planning work.

The list indicates that RWPGs lean heavily on local GCDs (see Maps 1 and 2) to produce their plans. Consensus desired future conditions (DFCs) devised by all GCDs in each groundwater management area were the measurable targets guiding GCDs’ rulemaking. Withdrawal controls embodied in those rules sought to ensure aquifers would reach those DFCs. Threats that cast achievement of the DFCs into doubt call for GCDs to rethink their rules. This makes the GCDs and their rulemaking critical elements in the planning process.

Obviously, the planning process involves complicated interactions among disparate groups of stakeholders. To smooth the process with more state-level coordination, the 2019 legislature passed HB 807 creating an Interregional Planning Council with members appointed by the TWDB. The council from each RWPG will include one member appointed at “an appropriate time” in the five-year planning cycle. The act specifically states TWDB will consider the RWPGs’ nominations when making council appointments.

Third, the council will share best practices regarding operation of the planning process. To accomplish this, the council must hold at least one public hearing and report to the TWDB on its work.

‘Law of the Biggest Pump’

This ongoing planning process indicates the state is indeed doing something to ensure adequate water supplies. The public has many opportunities to further those efforts. However, the persistence of the rule of capture threatens to undermine these measures, especially in scattered local situations. Specifically, the rule of capture applies in areas not covered by either the Edwards Aquifer Authority or a GCD.

Thus, owners in locations where the rule of capture applies (see the white areas in Map 2) can legally pump all of the water they want ungoverned by rules and regulations.

Map 3 shows the Trinity Aquifer boundaries in relation to Texas counties. The waters underlie the I-35 corridor, supplying some of the most heavily populated counties in Texas. Map 2 reveals that densely populated Dallas and Williamson Counties lie over the aquifer and have no GCDs. They are rule-of-capture territory. That has led to a conflict between the Clearwater Underground Water Control District and Williamson County. Bell County users who have seen their wells go dry despite rules and regulations imposed by the district blame Williamson County developers for pumping from the Trinity, unregulated by a GCD. Rural residents in Bell County worry that uncontrolled developers will continue to drain the aquifer to supply their rapidly growing development, leaving individual residents without water from their existing wells. That kind of conflict has sporadically occurred along the Trinity in heavily populated areas. 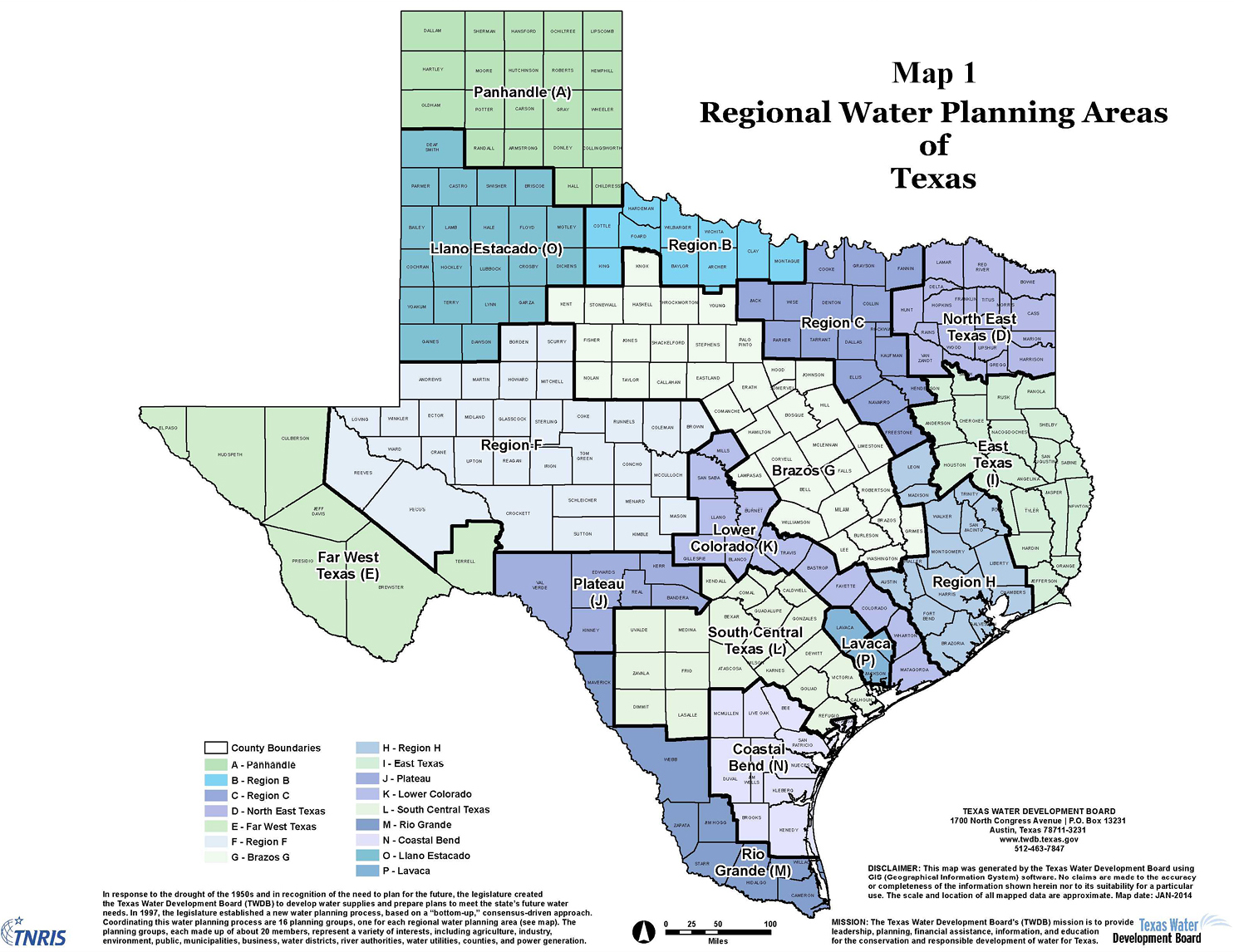 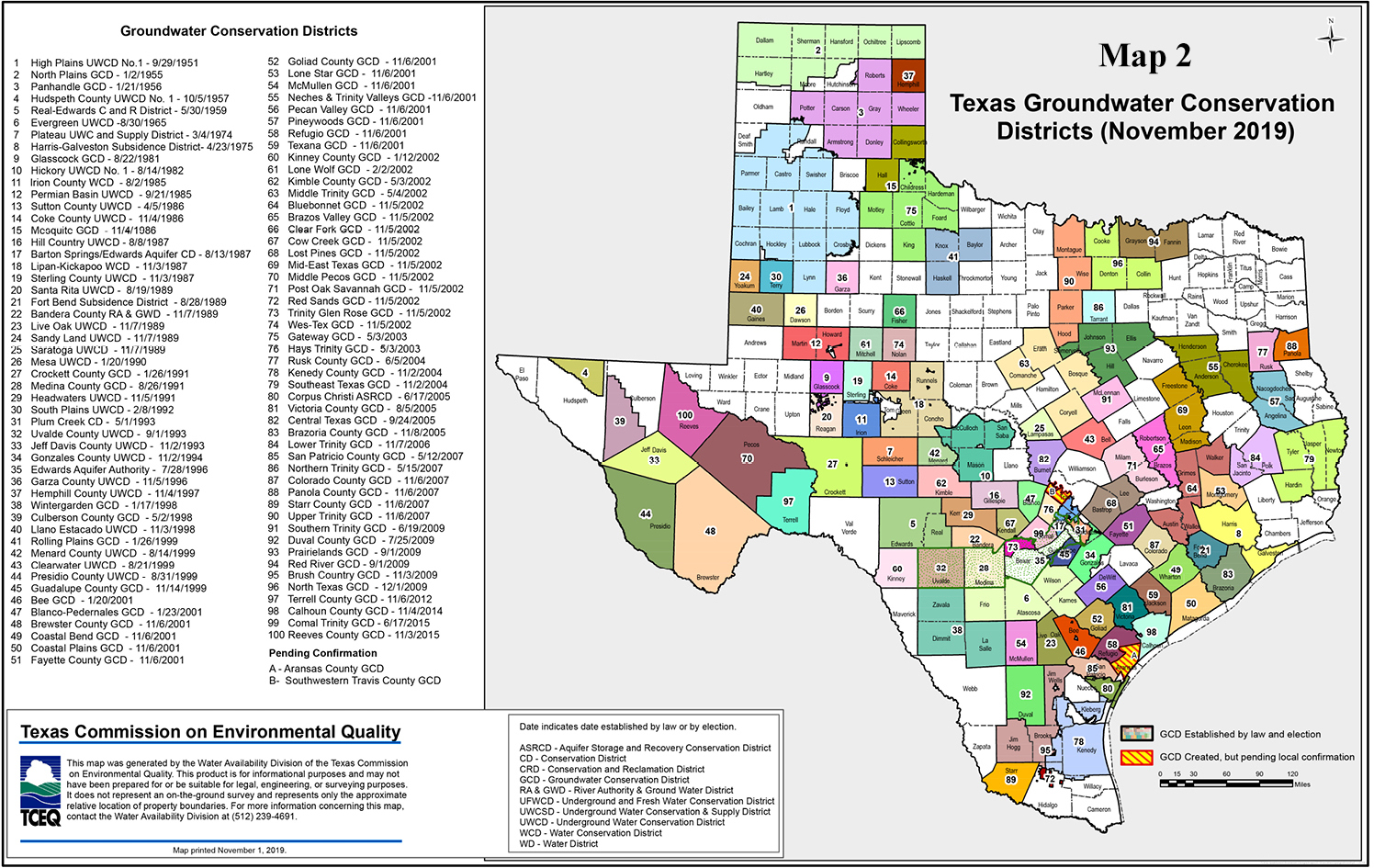 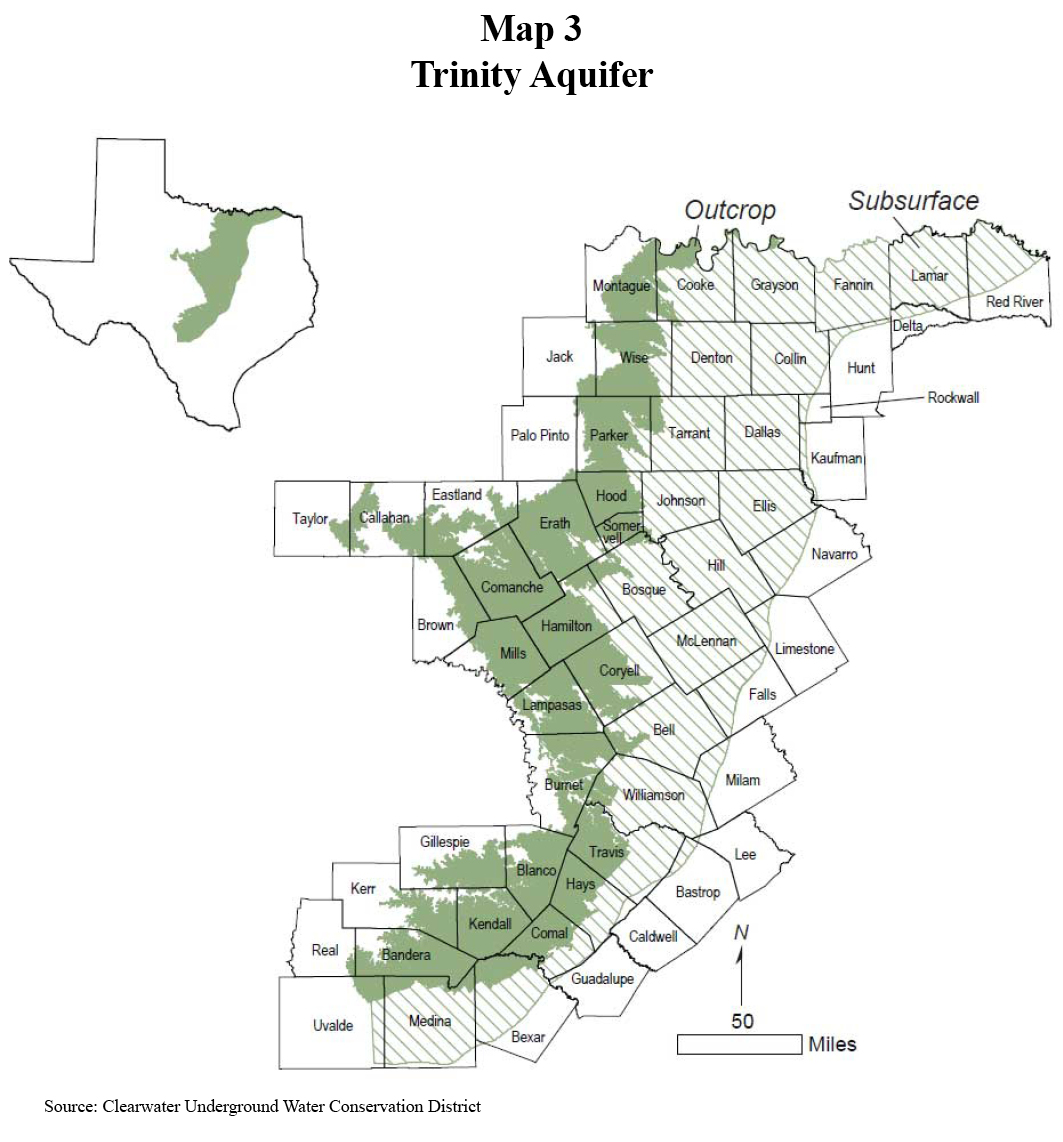 Dr. Gilliland (c-gilliland@tamu.edu) is a research economist with the Real Estate Center at Texas A&M University.